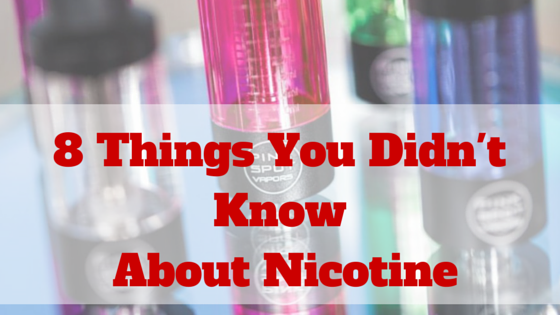 Nicotine, like caffeine, is a stimulant. I’m sure you’ve experienced taking those first few drags from your ecig and immediately felt more alert and awake, just as though you’d taken your first sip of coffee for the day.

Though you may have well known that already, there are a lot of facts about nicotine that you may not know. Which is why we’ve gathered up a few of our favorite secrets and lesser known details for your reading pleasure.

Nicotine can be found in many foods

Do you recall the episode of “The Simpsons” with the famed “Tomacco” plant? While that’s a cartoon with no basis in reality – just don’t argue that with this guy – you can, in reality, find nicotine in tomatoes! Nicotine naturally occurs in a number of plants in trace amounts, including potatoes, cauliflower and eggplant. Sounds like the makings of a strangely stimulating side dish!

Nicotine is a natural pesticide

Farmers of tobacco plants have seen their crop sales decline in recent years as more and more smokers quit or move on to vaping. However, there is a lot of promise for those plants being put to use by creating nicotine-based pesticides. Nicotine is a natural pest deterrent, and in 2010, scientists tested an oil made from tobacco plants on several different fungi, bacteria and the Colorado potato beetle. The oil worked quite well, killing all beetles and preventing three fungi and bacteria from growing, noted the American Chemical Society.

It takes just seconds to affect you

Nicotine is a fast-acting stimulant. After you take a puff off your ecig, the nicotine reaches the brain in just 10 seconds, starting to take hold and increasing your levels of dopamine and releasing a burst of epinephrine (adrenaline), according to Psychology Today. The dopamine helps to provide the feelings of pleasure, while the adrenaline ramps up the body’s systems, kicking up your heart rate and respiration.

But nicotine also gets a bad rap

On the whole, nicotine is not much worse for the human body than the effects of caffeine. Many of the same results you see with caffeine, like increased heart rate and alertness, are caused by nicotine. However, unlike smoking regular cigarettes or other tobacco products, nicotine consumption through an ecig doesn’t include the myriad carcinogens and chemicals that make smoking so harmful. Nora Volkow, director of the National Institute on Drug Abuse, even noted that on NPR, saying that the harmful effects associated with nicotine are generally misplaced beliefs, with the serious harm coming from the actual smoke from traditional tobacco use, not from nicotine.

Nicotine also offers another overlooked effect – it works as an appetite suppressant. People had commonly suspected this to be true, noting that people often gain weight and feel hungrier when they quit smoking. Now, thanks to Marina Picciotto, a Yale professor, and her research team, we know that nicotine activates receptors in the brains of mice that cause them think that “dinner time was over.” This, in turn, leads to a suppressed desire to eat, which can lead to weight loss and possibly even help in the fight against obesity.

Recently, nicotine has been studied as a potential treatment for Alzheimer’s disease and Parkinson’s disease. Medical professionals have known for years that smokers and nicotine users have been generally less likely to be diagnosed with either of these diseases. Now, a Vanderbilt University team has done research that seems to indicate that nicotine can serve as a sort of replacement for acetylcholine, which declines in the brain of someone who has Alzheimer’s. Research is continuing to examine the viability of nicotine as a treatment, but Dr. Paul Newhouse and his team are encouraged by the results so far.

Nicotine is named for a Frenchman

The name Jean Nicot is hardly a household name, but the nicotine that now bears his name is. In the 16th century, Nicot was introduced to tobacco while serving as the French ambassador to Portugal and began performing experiments with the drug the plant produced. He was said to have created a variety of ointments and oils that he used to treat tumors, gout and even headaches, according to the Encyclopedia Britannica. After sending a letter and some seeds to the French queen, tobacco-based treatments exploded in popularity in the royal circles, and Nicot was honored with a title and granted a tract of land where he retired. Later, in the mid-1700s, the genus of tobacco plants was given the name Nicotiana in recognition of Nicot’s contributions to popularizing the plant. He lent his name again nearly a century later, when nicotine was first produced from tobacco leaves.

Burn, but not boil

Whether you like your e-liquids with nicotine or not, these facts about nicotine are great obscure trivia knowledge to quiz your friends with or maybe score a win at bar trivia. Speaking of the bar, we’ve got a great selection of drink- and cocktail-flavored e-liquids that are perfect for that great taste of happy hour. Check them out today!

Study Finds E-cigs are Not a Gateway to Smoking

The Newest Flavors on the Market are Here