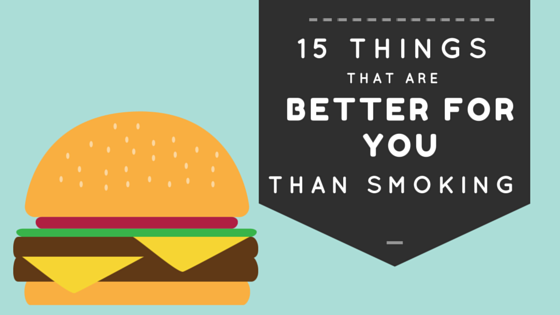 Since the days of the Marlboro Man and Joe Camel, we’ve gained exponentially more information about how harmful cigarettes can be. The average cigarette contains over 7,000 chemicals and 69 known carcinogens. One out of every five deaths in the United States is due to smoking cigarettes.

According to the Center for Disease Control, tobacco use is the leading preventable cause of death in the US. Each year, we see more than 480,000 deaths because of cigarette smoke – first and secondhand. Smokers can expect to live an average of ten years less than a non-smoker. While all of these statistics are dismal, data has proven that quitting before the age of 40 reduces the risk of death by 90%.

There are lots of factors out there that can kill you, but cigarette smoking is by far one of the worst. According to the internet, here are a few potentially deadly things that are still better for you than smoking those cigarettes:

Have you heard the buzz about greenhouse gases? Practically every politician has mentioned them at some point, and there are several initiatives out there to reduce them. These gases collect in the atmosphere to form a reflective layer – keeping the earth warm enough for human kind and all of our plant and animal friends. However the problem arises when we put too many greenhouse gases into the atmosphere and temperatures rise above livable conditions. Because of the currently high amount of greenhouse gas in the atmosphere, polar ice caps are melting, ocean levels are rising, hurricanes are more fierce, and ecosystems are becoming altered to the point of animal and plant extinction.

Often deemed as one of the most brave and treacherous professions, lion tamers are employed by every zoo in America (and beyond). But a lion tamer hasn’t been killed by a lion since 1872. His name was Thomas Maccarte and he was only 34 years old. About 600 spectators watched as Maccarte, dressed as a gladiator, entered the lion’s den and was mauled by a savage Asiatic lion named “Tyrant” and his four lion buddies. Based on a description of the event from an 1872 copy of the New York Times, his arm was torn from him while another lion caught him by the haunches. A third lion seized him by the ribs while another grabbed his shoulder. The fifth lion (Maccarte’s favorite), delivered the most fatal blow by grabbing him by the head – literally scalping him.

Maccarte’s death, while gruesome, is still less likely to happen than a death by cigarettes.

It’s on every daredevil’s bucket list, but astoundingly only about 20 people die each year from skydiving accidents. In 2013, 3.2 million people jumped out of airplanes across the US; but only 24 died. Since the year 2000, fatalities have decreased 25%, making skydiving much, much safer than smoking cigarettes.

Pesticides are terrible for the environment and our health. As we consume foods that have been grown with pesticides, the harmful chemicals build up in our colons where they are said to slowly poison our bodies. An apple a day is supposed to keep the doctor away, but if you are consuming an apple that is not organic, you are also ingesting over thirty different pesticides. Even after you wash it, you are still guaranteed to ingest harmful chemicals that build up over time. Pesticides have been linked to cancer, Alzheimer’s disease, ADHD, and even birth defects in some extreme cases. They are harmful to the nervous system, reproductive system, and the endocrine system.

But don’t worry! Pesticides are still better for you than smoking.

The sun has experienced some damaging press recently. Too much sunshine is known to cause sunburns and sun poisoning – which in turn ultimately leads to damaged skin cells and blood vessels, wrinkled skin, and skin cancer. Doctors have pretty much all agreed that skin cancer is preventable if proper care is taken to prevent over exposure to UV rays from the sun.

Not surprisingly, cigarette smoke is still worse for you than the sun.

Earlier this year Kraft recalled their famous (and delicious) macaroni and cheese – over 6.5 million boxes of their creamy lunch special were removed from the shelves because the boxes contained small pieces of metal. Kraft found a total of eight incidences where consumers reported finding actual metal pieces in their boxes (but no injuries were reported). Even if you happened to enjoy a large bowl of Kraft macaroni & metal, you’re still better off than a smoker.

S’mores were invented (or at least were documented in a recipe book) by good natured girl scouts in 1927. Since then, they have become a staple at every bonfire in America. Unfortunately, s’mores have gained an undesirable reputation. If you burn your marshmallow, expect to consume polycyclic aromatic hydrocarbons (aka PAHs). They have been shown to cause cancer in lab animals and have also been linked to cancer in humans.

The good news is that you can still consume crazy amounts of s’mores before you even come close to equaling just one cigarette.

Not too long ago the whole world went up in flames over the possibilities of catching Ebola. Popular Google searches included “Can you catch Ebola from a toilet seat?” and “Do I have Ebola?” The truth is that your chance of catching the Ebola virus in the United States is equal to about 1 in 1,967,150.

Getting Struck by Lightning

Mom always said “don’t go swimming during thunder storms”; but really she should have been preaching to you about the dangers of smoking cigarettes. There has been a steady decrease in deaths by lightning strikes each year. Most victims have been men and/or fishermen, campers, football players, boaters, or golfers. In the United States, your chances of death by lightning are about 1 in 10.6 million per year. Even lightning is healthier for you than smoking cigarettes.

Airplanes can be a nerve wracking experience for those who are afraid of heights. The possibility of dropping out of the sky in an aluminum vessel is quite chilling. However, the likelihood that an airplane accident will cause your death is 1 in 655,995. So go ahead and take that trip!

While fast food is blamed for a lot of misfortunes in our society, the occasional burger is perfectly safe. Even if you choked and died while eating your double stacked burger, you were still more likely to have died from smoking cigarettes.

The death sentence has been around since the dawn of humanity. Rulers like King Henry VIII were famous for using capital punishment on innocent people (even many of his wives). For criminals that commit capital crimes or capital offenses, the death penalty is a very real consequence. In the United States today, law abiding citizens such as ourselves run very low risks of death by capital punishment. About 41 people die each year due to legal execution. That number is tiny compared to how many die from smoking cigarettes.

In the Mean Girls movie, Coach Carr famously declares that “If you have sex, you will get pregnant …and die”. Unsafe sex has some serious consequences that involve more than pregnancy and death. Having unsafe sex with multiple partners brings about undesirable concerns like herpes, gonorrhea, crabs, scabies, syphilis, chlamydia, HPV, and HIV. According to some medical cases, sex might even cause heart attacks in some individuals who are not healthy enough for sex. Almost 1 in 45 heart attacks begin with sexual intercourse. Also: what if the bed collapses? This does happen and rare cases have been noted to cause death. In addition, you might also get arrested for sex if it’s in a public place. It’s pretty clear that unprotected sex is unsafe in general – but it’s still safer than smoking cigarettes.

In a sport known as parkour, the obstacle course based practice has caused some unfortunate deaths. Parkour is most often associated with running, climbing, swinging, rolling, and jumping around urban spaces. The risks of partaking in parkour are great. People have fallen through skylights and off of roofs, and slipped on surfaces; all leading to untimely deaths. One instance in Russia occurred when a 24 year old woman fell 17 stories to her death after misjudging a gap between buildings. Still, you’re better off testing out your Spider Man skills than you are smoking a cigarette.

Well, that’s it folks: 15 dangerous things that are better for you than smoking. To learn more about the harmful effects of cigarettes, check out the American Lung Association website.

Tags: 15 Things That Better Than Smoking, dangers of smoking, how dangerous is smoking?

Still Time to Weigh in on Proposed Ecig Regulations