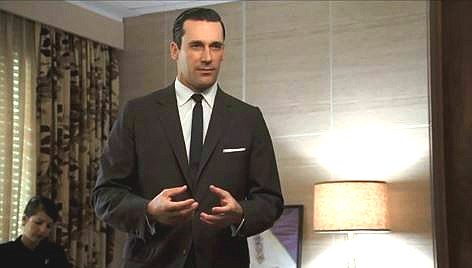 Don Draper is a high class executive despite his rocky past. In the office, he is the go to guy if you want the job done well. Don’s style exemplifies his position at his company with sexy tailored suits and a standard tie. Give yourself a slick comb over and have your eCig on hand and you have yourself the perfect Halloween costume. Don’s flavor of choice? Swagger.

Don’s reliable housewife is Betty Draper. One of the sexiest smokers on television, January Jones gives her character an innocent yet provocative personality. For Betty Draper, gather your high waisted skirt and a structured top. Watch a couple of YouTube videos (this one is good too) on how to get that signature 50’s bob and, voila! You have become the perfect 50’s housewife. Don’t forget your eCig! Betty’s favorite flavor is Retro Punch.

She’s exuberant, sassy, and one of the most famous villains in the world. Known for being an overindulgent antagonist, Cruella is instantly recognizable. To get yourself in character, you’ll need a slick black dress, a crazy fur coat, some white & black hair dye (Go for that spray that will wash out. Permanent Cruella hair might be tragic, or maybe really cool…), red gloves, and an eCig. We think Cruella would be vaping Appletini flavor. Bonus points for anyone that actually has a Dalmatian puppy.

In the 1950’s, the epitome of a sex symbol was the Marlboro man from Marlboro cigarette ads. He was a cowboy that sported a hat, some flannel, a pair of Levi’s, a coil of rope, and cigarette. He was a rough and tumble kind of guy and can usually be seen with a horse or some generally appealing Western scenery. The Marlboro man vapes USA Blend. Just update his look with an eCig.

A long time ago, cigarettes were a Hollywood symbol for glamour. Stars like Audrey Hepburn were the epitome of alluring smokers. Her famous portrait from Breakfast at Tiffany’s is the inspiration for tons of Halloween costumes each year. To turn yourself into Audrey Hepburn, you’ll need a sleek black dress and a string (or five) of pearls. Add a pair of black silk gloves, an eCig Starter Kit, and check out this YouTube video on creating that signature hairdo. Strawberry Champagne is Audrey’s ideal flavor.

An eCig or eJuice bottle

We searched the internet and really couldn’t find any examples of people who have already done this – which makes it that much more original! Browse through some of these cigarette costumes to grab some inspiration. You’ll just want to make sure you have the signature blue eCig tip and you are good to go. Vape with your all day flavor of choice. If you end up making a kickass eCig costume, send a picture our way. We’d love to see it!

How Vaping is Helping to Save the World

World’s most expensive e-cigarette is made of diamonds, costs $900,000

Vaping Takes the Stink Out of Smoking