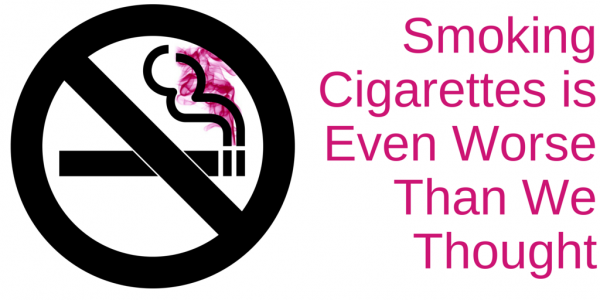 We’ve always known that cigarettes are bad for you. With the exception of the part of US history where doctors were recommending Marlboro’s, it’s been pretty clear that smoking cigarettes is a surefire way to come down with a whole list of diseases. Smoking cigarettes has been scientifically linked to twenty-one diseases (lung cancer, artery disease, heart attacks – to name a few). Many of the leading causes of death in the United States are strongly correlated with tobacco smoking.

Not surprisingly, recent research has revealed that cigarettes are even worse than scientists originally thought. After following a group of nearly one million people for ten years, researchers started to notice that some of the previous numbers didn’t add up. Diseases that had been linked to tobacco only accounted for about 83% of deaths in smokers. The findings inspired a deeper look into diseases linked to cigarette smoke.

Brian D. Carter, lead researcher, decided to dig deeper and see which diseases could also be linked to smoking. He notes that smoking tobacco is known to weaken the immune system, opening the doors for a whole host of infections. In addition, lung damage from smoke can lead to deadly respiratory illnesses. Carter also was able to link heavier smoking with higher risks for deadly illnesses.

Carter suggested that breast and prostate cancer could also be linked.

So what can we take away? It really hits home to many of us when we hear bad news about cigarettes. Many of us have quit or are in the process of seriously cutting back. The truth is that smoking cigarettes affects more than just death statistics. It severely decreases your quality of life and is attributed to tons of non-life-threatening health issues as well.

Vaping is a great step in eliminating cigarettes. It’s all a pretty serious conversation – but it’s necessary to think about our health in the long term. Congratulations for doing what it takes to be a healthier, happier you!

How has vaping helped you?

We’d love to hear your feedback! Has vaping helped you to quit smoking? What was your journey like? Did you begin vaping to cut down on the risks associated with smoking?

Ejuice Safety: Why It’s Important to Be Careful Around Pets

What Your Favorite E-Cig Flavor Says About You