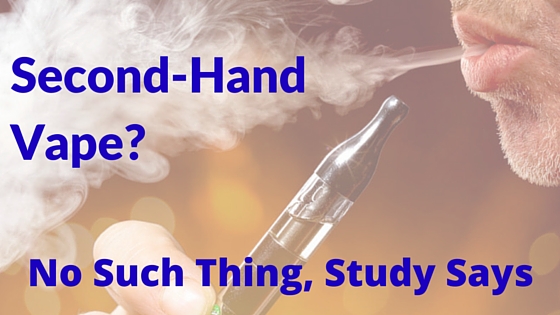 Most of us have heard the phrase “second-hand smoke” before, describing the potentially hazardous substances and unpleasant smells that come from passing by a smoker exhaling or their cigarette smoldering. During recent months, several groups have tried to pass off the phenomenon to ecigarette users with so-called “second-hand vapor.” However, a recent study has caused that accusation to go up in smoke – er, vape.

Last month, the Journal of Chromatography A, a leading publication for peer-reviewed research into analytical chemistry, published the findings of a team of researchers working with the Spanish Council for Scientific Research and the Institute of Environmental Assessment and Water Research. This study analyzed the exhaled breath of participants who smoked cigarettes, used “Type 1” ecigs – defined as disposables – and “Type 2” ecigs – rechargeables – as well as the ambient room air and normal exhaled air, looking for a series of 156 known volatile organic compounds, or VOCs.

In the study, samples were taken directly from ambient air, the two types of ecigs and cigarettes and compared with the exhaled breath of the study volunteers. To measure exhaled breath, people were asked to take and release three deep breaths before taking a breath for 20 seconds and blowing into the sampling device. This 20-second breathed sample was then used and averaged for the results published in the study as the comparison to straight sampling of the devices, room air and cigarettes.

There were several interesting findings from the study. First, in a selected pool of VOCs that the study highlighted (see Table 3), concentrations in exhaled breath from users of both Type 1 and Type 2 ecigs of many compounds – including isoprene, benzene, toluene and ethylbenzene – were at lower levels than the levels found in the exhaled breath of nonsmokers and nonvapers. In a few of these instances, such as toluene, the levels from vaping and exhaled breath from vapers was even lower than what was found in ambient air.

The study also showed that cigarette smoke and the exhaled breath of smokers contained nearly all the selected VOCs in higher concentrations when compared to all other samples. In fact, the only VOCs discovered in ecig vapor were benzene, ethylbenzene, toluene, p-xylene and o-xylene. All of these were found at concentrations thousands of times higher in tobacco smoke. In fact, concentrations in exhaled breath from smokers tended to have these VOCs concentrated at levels as much as nearly 100 times higher as the breath of vapers, as in the case of benzene.

Greek Dr. Konstantinos Farsalinos at E-Cigarette Research also reviewed the study, noting a stark contrast in the overall number of VOCs in each sample versus smoking. He notes that the ecigs contained 17 and 25 VOCs each, versus 36 VOCs in the ambient air of the testing area and 42 – six more – in the normal exhaled air of the control volunteers who did not smoke or vape. This is half that of the number found in cigarette smoke – 86 VOCs – making the clear distinction that vaping produces far less potentially hazardous and toxic compounds than smoking – and even than regular room air, in several instances.

Farsalinos also notes that the trace levels of nicotine found in the exhaled breath of vapers was negligible in both Type 1 and Type 2 ecigs. According to his analysis, the levels were so small that they would have no effect – “not even a biological effect, let alone an adverse effect,” to quote him directly – on anyone who was exposed to the breath.

This echoes what we’ve said before and will say again – take all news you read about vaping with a grain of salt. Sometimes studies paid for by big tobacco show hazards that don’t exist, or studies pushed by fear-mongers overinflate concerns in hopes of deterring people from vaping. We always suggest that you trust validated scientific research with demonstrable, repeatable results, and draw your own conclusions based on evidence, not pundits.

At Pink Spot Vapors, we’re confident in the quality of our products and continue to do all we can to ensure a safe and enjoyable vaping experience for our peers and our customers. It’s why we keep a news section highlighting vaping laws, and blog posts that report the latest industry news and research. It’s why we’ve also gone the extra step and had our gourmet eliquid flavors tested by an independent analysis lab and provide those results on every page for our customers. As always, you can contact us for more information or questions, or keep checking back on our blog for the latest news and updates and to stay involved in the discussion!

My Why – Part Two

Not All Ejuices are Created Equal

5 Reasons Why Vapers Are More Attractive Than Smokers