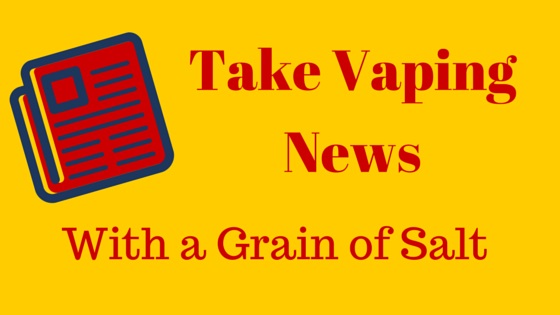 It seems like almost every day now there’s a new article out with something to say about ecigarettes and vaping. With so much spin, fear-mongering and mixed motives at play, it’s sometimes difficult to figure out exactly what to believe and what to write off as sensationalism. While it’s true that there is still a lot of research to be done on the long-term benefits and potential effects of ecigarettes and e-juice, there is also a good deal of misinformation and selective reporting on the topic.

National Review published an extensive article earlier this month discussing the so-called “War on Ecigarettes,” pointing out that main conflict between the different groups in support of or rallying against vaping fall into one of two categories, or what author Sally Satel calls precautionists and pragmatists. The former includes a number of advocacy groups, government bodies and agencies that are strongly in favor of regulation and restriction to moderate public health and accessibility of ecigs. Pragmatists, on the other hand, support vaping as a less dangerous alternative to traditional tobacco use and a cheaper option than many patches, gums or pharmaceutical approaches for those who are looking to quit smoking.

Among the precautionist camps, the prevailing mentality has been to obstruct and restrict at every turn. While all sides generally agree on a few restrictions that should be in effect, including restricting sales to children, implementing child-safe packaging and even limited oversight of e-juice additives, the lack of information on many other factors has led to a reactionary attitude in legislation. For example, when Chicago banned the indoor use of ecigarettes last year, then-Alderman Rey Colon spoke out against the move, saying “You’re lumping it together in the same category [as cigarettes] even though you don’t really have any proof that it has any harm. You’re saying ‘We’re going to regulate first and ask questions later.’”

The New York Times writer Joe Nocera also opined on the topic earlier this year, following the release of a study conducted by Portland State University researchers that was published in the New England Journal of Medicine. In his article, he notes that while the study reported that ecigarettes operated at a high-voltage could generate formaldehyde, the key takeaway was that when operated during normal, regular use, ecigs did not generate any formaldehyde. The media – and even the Journal itself – selectively took from the report, though, and promoted that high levels of formaldehyde were generated by ecigarettes, even though the high voltage settings used to generate those results would create an entirely unpalatable and burnt taste from overheating.

This study is just one of many examples pointed to throughout Satel’s article and elsewhere of selective and sensationalized reporting. With so much disreputable information out there, we recommend reading selectively, taking a look at the underlying facts whenever possible and considering anything you read with a healthy dose of skepticism and the proverbial grain of salt. There are a number of organizations looking to promote not only accurate information about vaping, but also help drive research into topics that truly warrant further discussion and exploration. Among these are CASAA, the Consumer Advocates for Smoke-free Alternatives Association, as well as Medical Organizations supporting Vaping and Electronic cigarettes (M.O.V.E.).

You can also stay informed and up to date on many of the latest reports and industry news by following our blog. Plus, stay informed about our latest flavors, great vaping news and tips and many other topics. Join in the conversation below, and stay tuned for more great ecig discussions!

Choosing the Right Nicotine Level for You

The Best E Liquid on the Market